Captain Herbert Johnson (left), 54, a Morgan Park resident and a 33-year veteran of the department is promoted to the rank of Captain by Fire Commissioner Jose Santiago (right), August 10, 2012. (Fire Media Affairs)

Chicago FD Captain Herbert “Herbie” Johnson, 54, and assigned to TL-39 has been identified as the firefighter who died in the South Side Fire today.

A Chicago Firefighter has died in the line of duty today after sustaining injuries in a South Side firefighter. The firefighter, not identified yet, was injured with another firefighter after a MAYDAY was called at the fire. The death was announced on the Chicago FD Twitter page (@CFDMedia): “This is director Larry Langford of the Cfd. It is my sad duty to announce the line of duty death of a Chicago firefighter.”

Two firefighters were injured in the South Side house fire, and witnesses say they saw fellow firefighters performing chest compressions on one of the injured before he was rushed away.

I will update once more information is available

Dave Statter has more of the story here 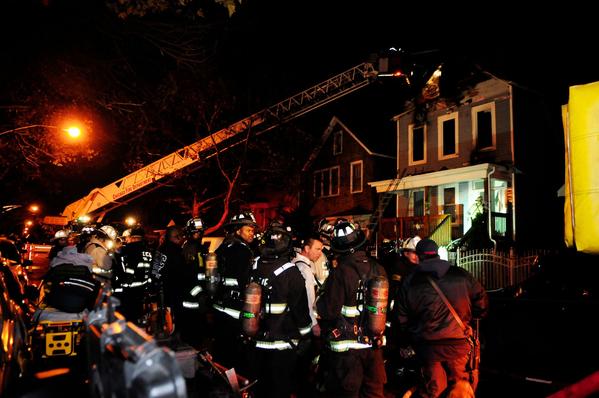 Firefighters work to clean up after a two alarm fire in the 2300 block of West 50th Place on Chicago’s South Side. (Reid Compton/for the Chicago Tribune / November 2, 2012)

The firefighters may have been trapped in a flashover, in which a building bursts into flame suddenly, Langford said.

Firefighters were called to the scene at 5:15 p.m. for the fire in the Gage Park neighborhood. The building was a frame home, 2-1/2 stories tall and about 25 feet by 40 feet, Ahlheim said.